Party producer Nelly J. Rosenking has seen some 15 marriages arise out of her events, so she had high hopes for this year’s Matzo Ball, a soiree held on Christmas Eve at Capitale in Manhattan.

“There’s a lot of like-minded people dressed up to have a good time, network, find their mate,” Ms. Rosenking, who has managed the party for the last 12 years, said at the event on Tuesday. “It’s a great meeting ground.”

Billed in promotional materials as “the nation’s premier Jewish singles event,” the Matzo Ball lured about 1,100 people to the Manhattan party space. The soiree was founded 27 years ago by the Society of Young Jewish Professionals, which works year-round to plan and promote the party.

The Matzo Ball, name notwithstanding, is nondenominational, though, obviously, it caters largely to young people who aren’t spending Christmas Eve with their families or at church.

The line to get in stretched down the Bowery, and this was only the New York incarnation of the event. Simultaneously, Matzo Ball parties were held in Miami, San Francisco and more than 10 other cities.

Why shell out $40 a ticket (plus a cash bar)? According to the Matzo Ball website, the party has spurred “innumerable friendships, hookups and marriages.” But most attendees on Tuesday said they weren’t looking for love at this shindig—they were just passing the holiday with friends, electronic dance music and a few vodka-sodas.

“If I weren’t here I’d be drinking at home,” said Shauna Goodgold, an actress (and tech startup employee) dancing at the party. “Or watching movies, eating ice cream, getting fat and that’s about it.”

As the night wore on, the group Ms. Rosenking described as “young professionals, Jewish singles” loosened up enough to mingle with strangers. Few were aiming for marriage, though.

She and her friends were home on a break from school, and it was the Matzo Ball or hanging out together elsewhere.

The party’s matchmaking powers may be up for debate, but the event still has cachet in some circles.

“We live in New York,” Ms. Paroly said, “and this is kind of the event to go to on Christmas Eve.” 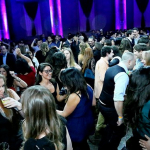 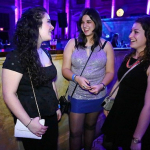 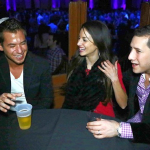 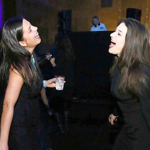